Making life better, one note at a time After a concert is always a busy time for music teachers, almost as busy as getting ready for the concert itself.

Carlos Armao knows all about it. He is the director of the Sistema NB classical music training centre in Miramichi.

Sistema NB is a program of the NB Youth Orchestra. It is a free after-school program which teaches kids how to play an instrument based on the Venezuelan program “El Sistema.”

After the concert on March 16 at King Street Elementary School, Armao was greeted by parents telling him how good the band sounded.

Sistema NB currently has approximately 74 kids from the Miramichi area enrolled in the program. Armao said he’s seen firsthand the impact the program has had on these children and it amazes him every single day. 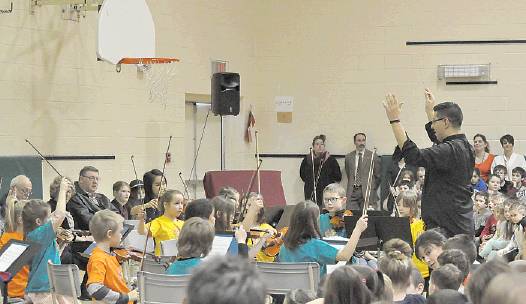 “Without Sistema most of the kids won’t get a standing ovation.”

Armao was born in Venezuela, he started playing music with the local El Sistema centre. In 2014, he graduated from McGill University and in January 2016 became the director of the Miramichi Sistema centre. He is one of three instructors based in Miramichi, with classically trained musicians Emily Field and Adora Wong also on staff.

Sistema teaches kids to work together, which is important in an orchestra and in life, said Armao.

“We cannot be great unless we’re great together.”

Caden Buckley is a viola with Sistema NB Miramichi. Armao is a great teacher, said Buckley.

For Armao, seeing how children like Buckley have progressed always puts a smile on his face.

“Just imagine, if two years ago these kids just playing on paper instruments Today they are playing Star Wars, Russian dances, Mozart and Beethoven Imagine where they’ll be in two years I can see it.”

With the progress, Armao hopes to see kids make it to the next level.

“My dream is to see some of the Miramichi kids be a part of national and international youth orchestras.”

”If you have a music stand in... END_OF_DOCUMENT_TOKEN_TO_BE_REPLACED