The Sistema Saint John Centre was buzzing with activity on Saturday November 24th from its Open House - parents had the opportunity to watch their kids work with their Sistema teachers while also enjoying a short performance from the Saint John Youth Orchestra and Teaching Artists! 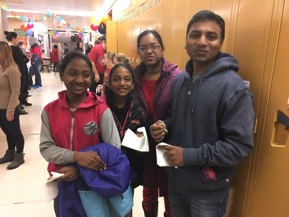 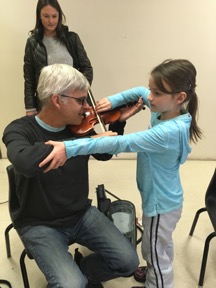 At 10:30, the kids headed to their classrooms for sectionals with their teachers, but this time they had their parents in attendance. This was a unique opportunity to see the children engage in a typical Sistema classroom; teachers had to chance to demonstrate their pedagogy to the parents of the students they teach everyday, and the students had a chance to show off what they have learned so far to their parents. However the fun didn’t stop there! After the 30 min sectional the kids were able to take control of the class, teaching their parents how to play their instrument. There was a dual effect here: the parents recognized the amount of discipline and patience it takes to learn a musical instrument, and the kids had the chance to teach what they’ve learned everyday at Sistema.

After sectionals, parents and students could watch the Saint John Youth Orchestra (SJYO) rehearse and perform Leonard Cohen’s “Hallelujah” and Camille Saint-Saëns’ “Bacchanale” from the opera “Samson and Delilah”. The SJYO were also recording “Hallelujah” later that day to take part in the 2018 CBC Canadian Music Class Challenge so it was a fantastic opportunity for SJYO students to get focused before their intense recording session. When the SJYO finished their performance, the Teaching Artists formed their own orchestra! They played two pieces, “Dream” by our very own Saint John Centre Director Rachel Kidd, and the popular song “Feel It Still”, arranged by Ms. Kidd. 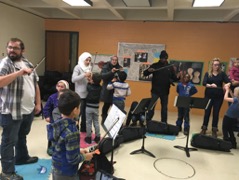 There were many memorable moments from the day, but there was one room in particular at the Open House that stood out. The Saint John Centre’s string tutti rehearsal space was transformed overnight into the “NBYO Experience Pathway”.

The Pathway highlighted all of the different ensembles and levels offered at the Saint John Centre, including bios of current students in each group, giving parents a clear idea how their kids can reach the next step and eventually play in the New Brunswick Youth Orchestra. There was an impressive display of information for the parents: a projector was playing video performances of each orchestra so you could really hear the progress of each stage. The walls of the room were filled with bios of the Saint John Teaching Artists, displaying the vast array of teaching and performing experience the Centre has. There was also a hand-made map of New Brunswick that showed all of the different Sistema Centres in the Province, giving the room a real personal touch while also showing the influence our program has had in New Brunswick.

The Open House was truly a special day for teachers, parents, and children. We hope to do it again soon!

This year this Sistema Program... END_OF_DOCUMENT_TOKEN_TO_BE_REPLACED