‘These kids work so hard to achieve so much’ “I tell him everyday that I am proud of him,” said Murphy. “His confidence, love for music and ability to play have grown since he joined Sistema.”

Corbin also played with PopsNB this past July,  a program of the Moncton Youth Orchestra which allows young musicians to perform in a free, outdoor, summertime orchestral concert.

Following that experience, Corbin and a handful of other local musicians are now members of the Moncton Youth Orchestra, practicing twice a week with the large musical ensemble and performing in classical and Christmas shows in Moncton’s Mathieu Martin High School.

Corbin still practices with Sistema Miramichi every Monday to Friday after school,while also taking private lessons twice a month and travelling to Moncton twice per week to practice with the youth orchestra.

“Paydon works so hard and has learned so much since going into the program,” said Murphy. “Music is in his blood. So much of his family played music and to see him love it so much and take to it, I couldn’t be prouder."

Murphy said her youngest son, seven year old Nicholas Corbin, is also a part of the Sistema Miramichi and plays the viola just like his brother.

“I am over the moon proud of these kids and for their amazing achievements in such a short amount of time,” she said. 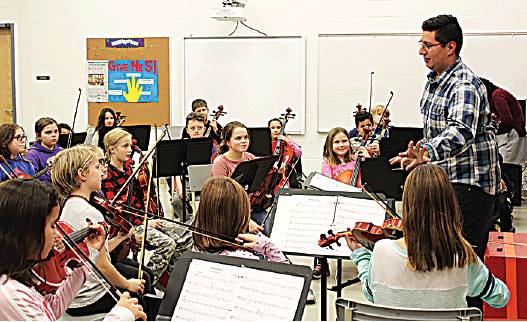 For Carlos Armao, executive director of Sistema Miramichi, the experience of starting the program and seeing how positively it has affected Miramichi children has been one of the greatest rewards of his life. “These kids work so hard to achieve so much,” he said. “The kids that are playing in the Moncton Youth Orchestra have only been playing for two years really.”

Sistema Miramichi started back in January of 2016, when Armao first came to the city from Venezuela to start teaching children the value of music and learning string instruments.

For Armao, it was a great surprise to see just after two years that Miramichi children were performing in the MYO, an orchestra he considers to be  professional sounding.

“These are just 10-year-olds playing in a professional orchestra, this is happening right now in New Brunswick,” he said.

“I get to talk to these children after and see how proud they are of what they have accomplished and they tell me that they are proud, but that they want to do better and achieve more.”

The mantra of “we can do better” has become engrained in their everyday practice, he said, and he added that to hear and see the pride the children take in their music fills him with pride.

Armao said when children read music, it can be like learning another language and engages them in ways that helps them develop as people.

A product of Sistema himself, Armao said he knows personally how the program can lift children up, even if they may not have the means economically all the time to do so.

“The levels and spheres that Sistema touches in these children’s life is proof that this program can help these kids become so much more than they ever imagined,” he said.

“The benefits of Sistema are right there. We started out with 20 kids at first and now we have 100 kids enrolled and when you see these kids move and play together, you can see how much they have achieved.”

Now  there are over 1,200 students province-wide taking part in the Sistema program, which leads Canadian provinces, and is something Armao hopes to improve in the coming years.

He said he hopes to eventually have 1,000 Miramichi students enrolled and playing in the Sistema Miramichi.

For students like Abdulrhman Alsaidy, a Syrian refugee,  joining the Sistema program has given him a new love for music. 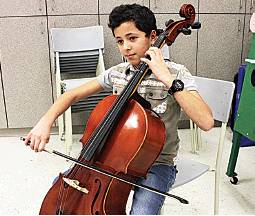 Abdulrham Alsaidy plays his cello and shows off his skills and knowledge of music. PHOTO: ERNESTO CARRANZA/MIRAMICHI LEADER

Since joining the program, Alsaidy said he has made new friends and learned so much.

“I love playing music and practicing music, it is fun,” he said.

The Moncton Youth Orchestra  will be performing again in March and Sistema Miramichi will perform  again on Dec. 14.

This year this Sistema Program... END_OF_DOCUMENT_TOKEN_TO_BE_REPLACED