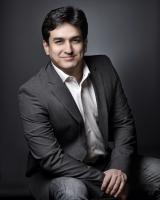 Maestro Antonio Delgado, born in Caracas, Venezuela, owes much of his musical education to the world-renowned El Sistema program (National System of Youth and Children's Orchestras of Venezuela).

Though he has conducted every major orchestra in Venezuela, Delgado has not hoarded his talents, as performance dates in Ecuador, Puerto Rico, Canada and Panama clearly attest.

From 2005 to 2010 Delgado was Musical Director of the National Theatre "Teresa Carreño" the largest arts centre in South American.  During this time he conducted the major orchestras of the country in symphonic concerts, ballets and operas, garnering particular acclaim for his “very elegant musical direction and his absolute mastery” of ballet and opera scores (Diario La Voz. Caracas).