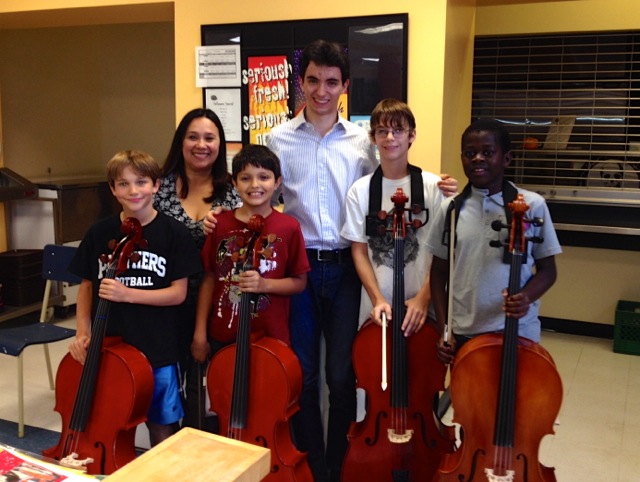 Stéphane Tétreault, who’s only 20, gave master classes to four of the program’s promising young cellists, and performed for all 140 string musicians (violin, viola, cello and bass), including 20 cellists, and faculty, demonstrating not only skill, but also what can come from dedication to a musical instrument.

“I think the most important thing is to try and inspire (the young musicians),” he said. “When I was their age, many older musicians inspired me, a lot, to keep going, to keep working.”

“The most important thing in music is to work, to work toward a goal,” he said.

With their daily two-hour practices, Tétreault believes Sistema NB students are on the right track.

“They seem very energetic,” he said, watching them perform before the class began. “It was quite impressive.”

When it was time for him to show them some tricks of the trade, Tétreault didn’t just perform on any old cello, he performed on a really old one: the priceless Countess of Stanlein Ex Paganini Stradivarius Cello, which was built in 1707, on loan by Mme. Jacqueline Desmarais.

Tétreault said he’s had the chance to play the instrument for the 1 ½ years.

“For them to have a visit from a young, celebrity cellist — someone who’s actually so revered that he’s been granted the opportunity to play with this priceless cello … really makes for a magical combination,” said Matheson.

Vincent Mambo, 11, was one of the four students who received masterclass lessons.

Still, he was open to any tips from Tétreault.

“Whatever the master tells me,” he said, of what he was hoping to learn, adding he needed work on the times his cello made “squeaking noises.”

The students weren’t the only ones who learned valuable lessons at the event.

“It’s also very inspiring for me to see little ones who are so interested in music,” Tétreault said. “Whenever you coach someone, you sort of learn from that because you have to think about how to explain something, so that makes you think about what you’ve learnt and what you often forget.”

Some of the performer’s accolades include: first prize winner of the OSM Standard Life Competition in 2007; youngest participant in the YouTube Symphony Orchestra, which performed at Carnegie Hall in New York in 2009; released his first recording featuring works by Saint-Saëns and Tchaïkovsky, accompanied by the Orchestre symphonique de Québec and maestro Fabien Gabel, for the Analektalabel, in 2012; named in the Top 25 2012 Artists of the Year by La Presse.

Tétreault studied with the late Yuli Turovsky for 10 years, and is currently completing a bachelor’s degree at the Université de Montreal.