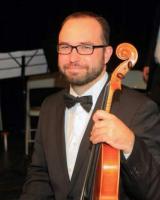 Seán O'Brien became the Sistema NB Tracadie Centre Director in the fall of 2020. He first joined the Sistema NB and NBYO family in September of 2020, serving as a temporary cello Teaching Artist in Richibucto and Elsipogtog.

Born from a long line of violinists and fiddlers, Seán began his musical training at age 4. He has since become a violinist, cellist, violist, guitarist, oboist, flautist, harpist, pianist and a classical/folk singer. His musical passion led him to study music at Vanier College, Concordia and McGill Universities in Montreal as well as the Musikhochschule in Freiburg, Germany. He has played in various symphony orchestras as well as numerous chamber groups over the years in his career. He represented Ireland for Canada's 150th celebration in Ottawa as a guest soloist.

Seán is also a music teacher with over 20 years experience. Before he left Quebec, he was a rehearsal conductor as well as a cello and viola coach for various youth orchestras in Montreal, such as the MRYO and the WIYSO as well as for the St Lawrence College to name a few. He was also Head Teacher in a center for Sistema Quebec until March 2020.